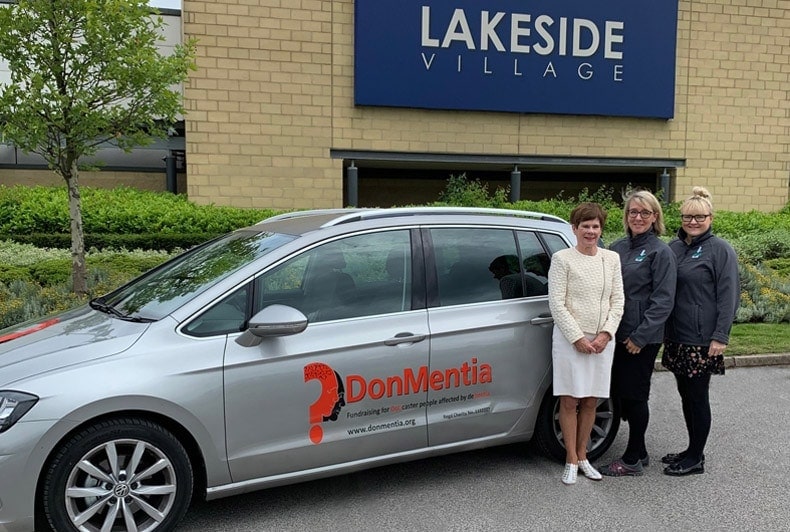 Shoppers at Lakeside Village have been voting for the centre’s new charity of the year and this year’s winner has been named as DonMentia.
The local dementia charity was set up by Eileen Harrington in 2013 to raise money for people in Doncaster who are affected by Dementia.
Eileen said: “We are thrilled to have been chosen as Lakeside Village’s charity of the year. We are a very small team who are all unpaid volunteers, so that all the money raised goes to where it is much needed.
“It is lovely to know that customers who shop at Lakeside Village have given us their support by voting for us at the centre and we are really looking forward to working with the team over the next 12 months to raise awareness of the work that we do and to raise vital funds to help people from our town.”
There are over 120 types of Dementia, the most common of which are Alzheimer’s disease, vascular dementia and Lewy Body Dementia.
Dementia is progressive, which means that the symptoms will gradually get worse. How fast Dementia progresses is different for each person.
Symptoms associated with an ongoing decline of brain function include problems with memory loss, thinking speed, mental sharpness and quickness and language.
Lyndsey Parry, deputy centre manager at Lakeside Village said: “It has been wonderful to meet with Eileen and hear about the work that DonMentia does to help people in Doncaster living with Dementia.
“Our nominations for our charity of the year always attract a lot of attention online and then a shortlist is put to the public vote with our customers being given tokens each time they shop to vote for their favourite charity.
“Previous Lakeside Village charity of the year winners have been Bluebell Wood Children’s Hospice and Team Verrico.
“We are sure that our stores will join us in welcoming DonMentia to the Lakeside family for the next twelve months as many people have had first hand experience of a loved one having this syndrome.”
DonMentia will be Lakeside Village’s charity of the year for 12 months from July 2019.
For further information about the charity visit https://donmentia.org/