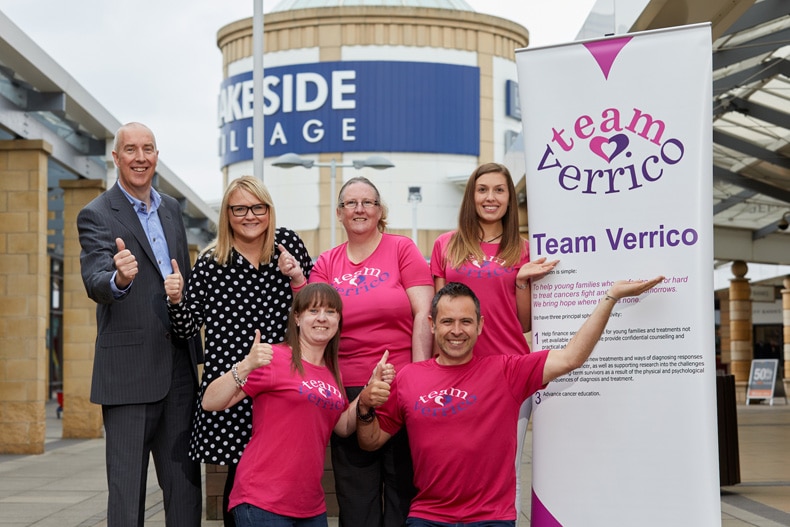 A local charity cancer has been chosen by Lakeside Village customers and staff to be their charity of the year for 2018 after a public vote nomination was held online and a shortlisted vote was held at the centre.
Customers at the leading retail outlet were asked to vote from a shortlist of three charities, which had been whittled down more than 20 charities nominated by almost 500 people online.
David Aunins, centre manager for Lakeside Village said: “We are delighted to be able to name Team Verrico as our charity of the year for 2018. This will allow us to focus our fundraising efforts for the whole year and mean we can really raise a significant amount of money for the charity. Thank you to all of our customers and staff who have taken part in this process by nominating and voting along the way. Now, together, we can carry on this good work and raise some money that will really make a difference to the people Team Verrico work with.”
Team Verrico follow Bluebell Wood Children’s Hospice, the centre’s first ever charity of the year who were selected in 2017.
Over the year staff and customers alike pulled together and donated over £5,000 which is along with more than 1000 bags of pre-loved clothing, worth an incredible £15,000 to the charity. People took part in colour runs, the centre was turned purple and the management team even walked over sizzling hot coals to help raise this money.
Following this year’s round of public nominations the five charities which had received the most nods were put to stores at Lakeside Village to vote on and reduce them to a shortlist of three. Customers then had two weeks to drop tokens they received with any purchase made at the centre into boxes corresponding with each charity.
Team Verrico came out on top after receiving 43 percent of the votes and have now been named Lakeside Village’s charity of the year 2018.
Paul Verrico, from Team Verrico, said: “As an entirely volunteer led charity we are dependent on the support of local organisations to help us secure our objectives.
“I have shopped at the centre myself for many years; the charity is excited to be partnering on this alliance which will increase visibility of our service and hopefully help some of those who use the centre to achieve more tomorrows when suffering a cancer diagnosis.
“The generosity of folk from Yorkshire is well known and we look forward to working with the staff and shoppers to raise funds and awareness whilst having some fun along the way!”
For more information about Team Verrico visit www.teamverrico.org