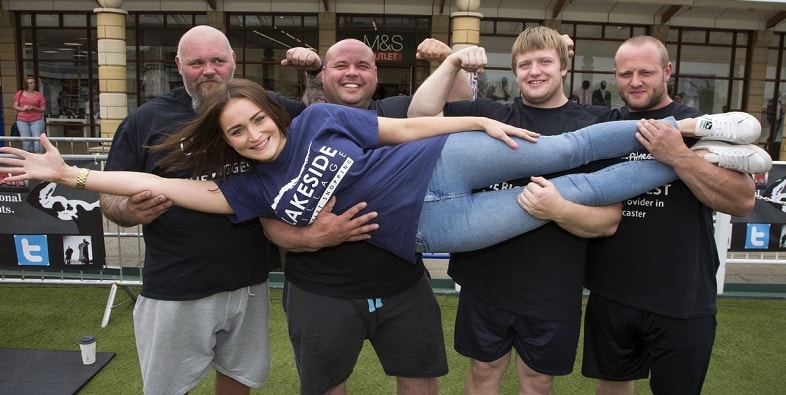 FOUR of the country’s strongest men wowed shoppers with their skills at Lakeside Village recently, as part of the outlet shopping centre’s Father’s Day celebrations.
The group, including Ryan Oldfield, Yorkshire’s current strongest man for 2015 / 2016, held a meet and greet for shoppers at the centre, before taking part in a series of events throughout the day.
Cheryl Sadler, centre manager, at Lakeside Village, said: “We loved welcoming the strong men to Lakeside Village. Throughout the day they wowed our customers with a number of events including a car dead lift, tug of war and atlas stones.
“The events were refereed by Mark Anglesea, two times Guinness World Record holder, who holds the world record for the most amounts of lifts of a car in one hour.
“It was a great way to mark Father’s Day 2016 and give our shoppers a really exciting experience here at Lakeside Village.”
Ashton “the bear” Reid, who at just 23 years old holds the titles of Junior Strongman, 2nd England’s strongest junior, 3rd Junior UK strongest man and 2nd place strong beach world championship were also at the centre throughout the day.
The event was supported by Doncaster Culture and Leisure Trust, who provided a fitness team to test shoppers’ fitness levels, and promoted the upcoming World’s Strongest Man and World’s Strongest Woman events set to take place at the Dome in September.